View source
watch 01:40
The Sandman Will Keep You Awake - The Loop
Do you like this video?
Play Sound

The Mega Memory Card for Gameboy is produced by Interact. If you live outside the US, it is easiest to get this card through ebay: 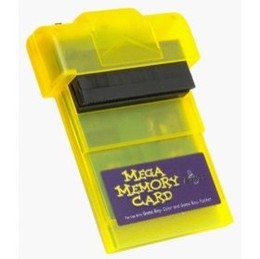 The card works with all known Gameboy models. There is just a small problem with the old Gameboys, where you have to cut away some plastic from the Gameboy to make it fit physically. (this is done easily).

Note (added by Berko): There are at least two versions of the Mega Memory Card: the newer yellow transparent one that will work with all carts and an older black one that won't work with EMS-carts (as recently sold original LSDJ-carts are). But Bung / Dr.GB carts will work with the black version.

For those of you who play live a lot, and don't want to bring out a laptop+linker to every show, the Megamemory Card might definitely be the solution. How does it sound with a self-contained backup unit with space for up to 68 songs? Pretty good, eh?

The device places itself between the Gameboy and the flashcart, and turning on the handheld with the MMC activated brings you to a simple interface where you can backup, restore and delete SRAM, and adjust some settings.

I tested the device with two different carts. One of the excellent Bung / GBX? 64Mbit carts, that fits a total of 4 copies of LSDj, and one EMS 16Mbit with room for just one copy. Not totally surprising, the EMS cart proved to be a bit different when dealing with its SRAM, and definitely not in a good way.

Backing up all 4 LSDj saves (there's no option to save just a single one, only the entire memory of the cart) on the Bung / GBX? cart takes about 6% of the MMC's totally capacity and the operation takes approximately 13 seconds. (8 seconds to restore back to cart.) This gives you the ability to store a total of 68 songs divided in 17 sets on the MMC. However, doing a backup of an EMS cart eats a whopping 25% of the capacity, and taking 27 seconds. (13 seconds to restore.) And that's just one song, meaning you'll only be able to store 4 songs in total on one MMC. So if you happen to be one of those lucky fellows with a Bung / GBX? cart – consider yourself even luckier now. (I know I do!)

So, besides the pretty shameless performance with EMS' carts (entirely their own fault probably), what other niggles and let-downs are worth mentioning? I haven't tried this myself, but apparently it's quite sensitive to intermittent contact, and being dropped. Songs, Gameboy camera dumps and probably one or two Pokemon saves have been lost this way. So, boys and girls, don't put faith in this device to entirely replace that linker of yours. Also, if you try to save more than what the MMC can hold it doesn't give you any warning about it. It just shows you the “Working...” screen for a while and then returns to the menu as if the save was successful. Fortunately you have a capacity meter telling you how much you got left.

When they designed the casing for this device I guess they didn't bother testing it with the old grey Gameboys, because the latch that locks the cart in place when you turn the power on is halted by the body of the MMC. So you basically need to open your trusty grey friend and cut away the latch from the power switch. This is really simple though, so don't worry. Just be careful when cutting that plastic. You don't want to be bleeding all over your Gameboy's guts just because you thought you could use that dinky nail clipper to cut it, right?

Other things worth mentioning are the functions that can clear the SRAM of your cart, as well as reset the MMC to its default, completely blank, state.

you don't even need to open the grey gameboy to cut the latch. i cut mine off with a scalpel from the outside. just turn the power on without a cart and cut away. tools: sharp cutting device and needlenose pliers.

A video of MMC in action.

Community content is available under CC-BY-SA unless otherwise noted.
Advertisement